Relationships Between the Descendants of the First Man and Woman Genesis 5:3 "When Adam had lived 130 yrs., he became the father of a son in his own likeness, according to his image and named him Seth"

Genesis 6:1-3 "Now it came about when men began to multiply on the face of the land, and daughters were born to them, that the sons of God saw that the daughters of men were beautiful; and they took wives for themselves, whomever they chose."

We're going to take a little liberty here and look at courtship and marriage after the Fall of Man. So there were sons of men who saw these daughters or women that they were beautiful and took wives to their choosing.

So Adam V sees Evanna at a party and thinks she is just the sweetest thing. Adam V spends so much money on his chariot and clothing, she is sure that he is rich and will easily support her expensive tastes.

Well, they date for a year, but pretty much cover up most of their faults. Adam V pops the big question and the Big Day Arrives. 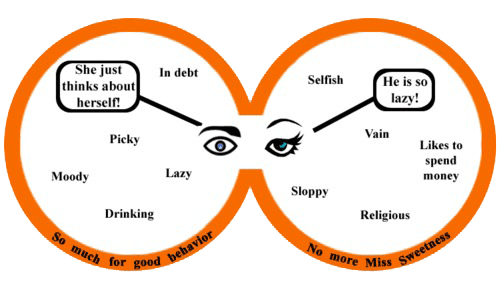 By now Adam V and Evanna have been married a week or two and they are so in love they still cover up one another's faults. But a few months later the Honeymoon will be over. Sounds familiar?

Mark 10:8 "And the two shall become one flesh; so they are no longer two, but one flesh."

Mark 10:8 "And the two shall become one flesh; so they are no longer two, but one flesh."

It's not that Adam V and Evanna have changed or were trying to deceive each other - the fact is, that now they are one flesh. So what this means is that their faults are now open and visible to each other.

Evanna also finds out that Adam V is in debt and because she loves to spend money, they're almost out of shekels. The usury rates have gone through the roof, and all they do is pay off past debts and Evanna's also now expecting their first child.

Now, mom and dad have no time to themselves and have no money to go out for dinner. They thought that having children would bring them together, but they grow farther and farther apart. They let Jr. stay up till all hours of the night so they have absolutely no time alone together.

See you all in No.14 Fast Forward to Today's Marriage 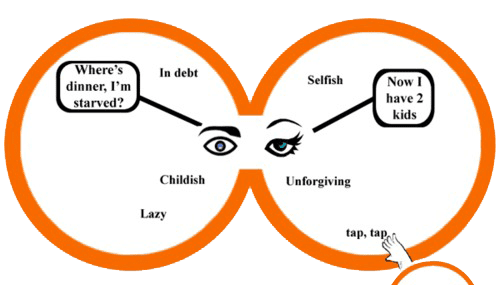